Early this week my wife, Rebekah and I escaped for a mini vacation over our 26th anniversary.  First vacation in a while for us.  We decided to go someplace new for us.  She grabbed a great hotel in Bemidji (Doubletree by Hilton - fantastic property) and we made plans to visit Big Bog Recreation Area north of Waskish, MN.

After days of hot weather at home, we were presented with a high of about 69 Fahrenheit and 50 percent chance of rain for our day planned for the bog, but we only had one day for this, so off we went on the 1.25 hour trip north.

Rebekah had a rain jacket and I had rain ponchos stuffed in the camera bag and they were needed as we started out to the mile long board walk into the bog. 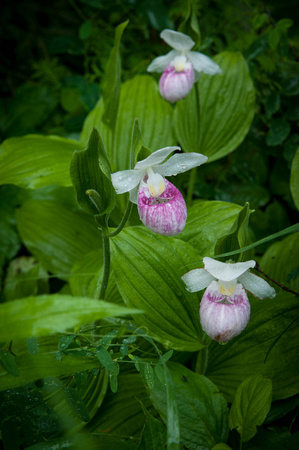 On the short lake around a pond that leads to the boardwalk we immediately found what I really wanted to photograph.  We'd seen several on the drive, but I really didn't want to stop on the highway to shoot.  So, I was happy to find them so quickly.  The Minnesota state flower, the Showy Lady's Slipper.

As it was back home, spring was slow and late.  That means the flowers are sort of late in blooming.  Normally, these would be long past blooming by July. 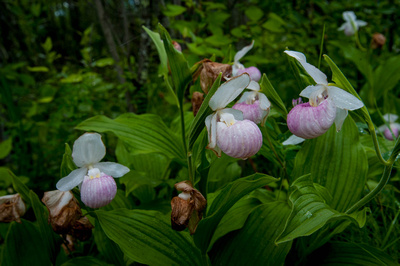 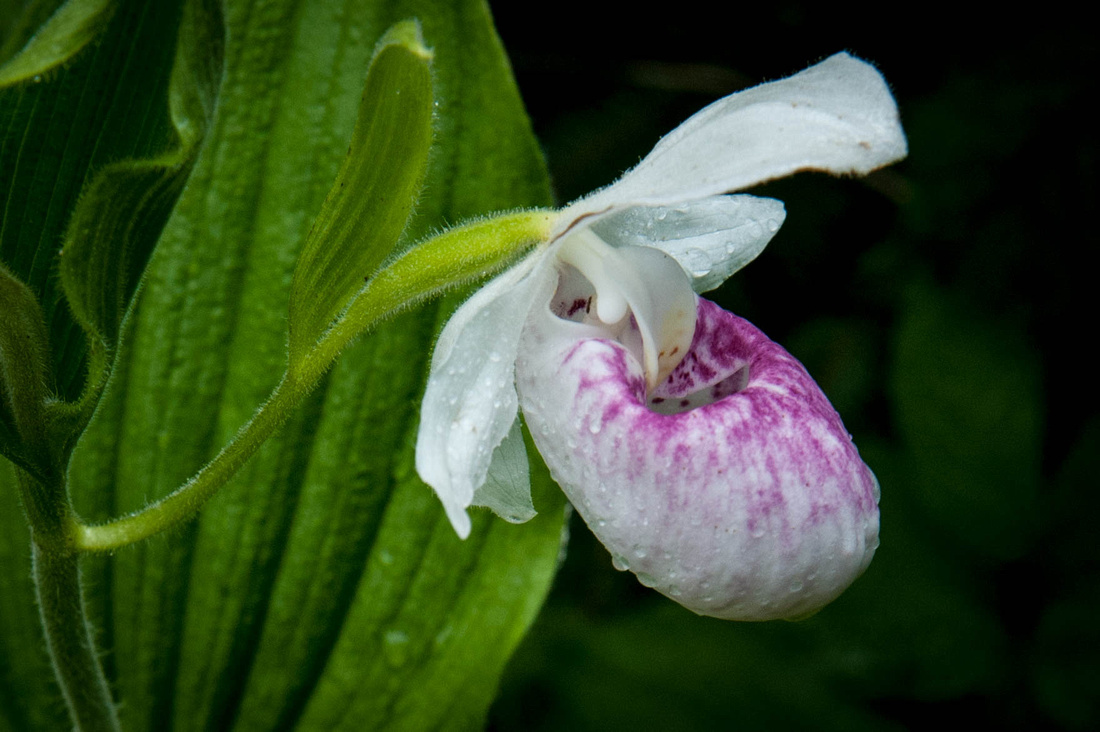 I won't complain too much about the rain at this point as the water droplets looked pretty cool on the flowers.

I didn't notice until I was doing some processing, but this next image, it appears that a tiny green spider has taken up residence on this bloom.  You can spot the spider right in the center of this image on top of the pink of the bloom. 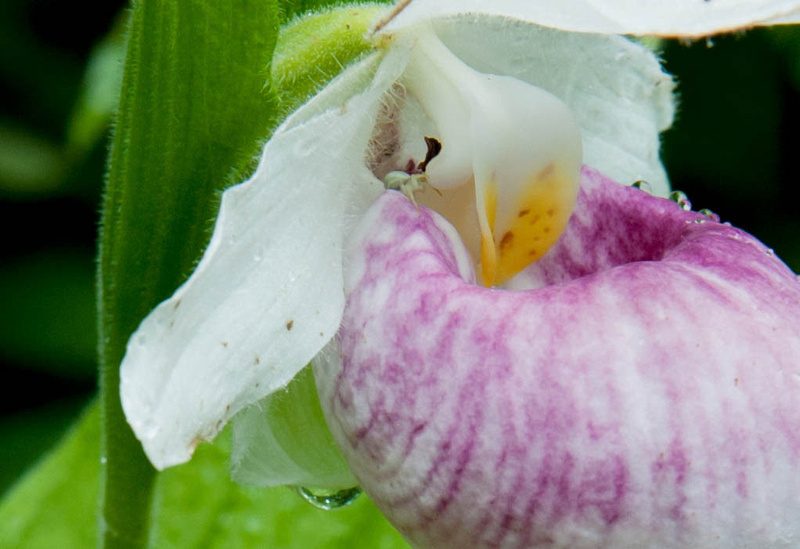 As we worked our way out into the boardwalk over the bog, we started seeing a lot of plants we've never seen before (or at least in my case, not since I was a kid). 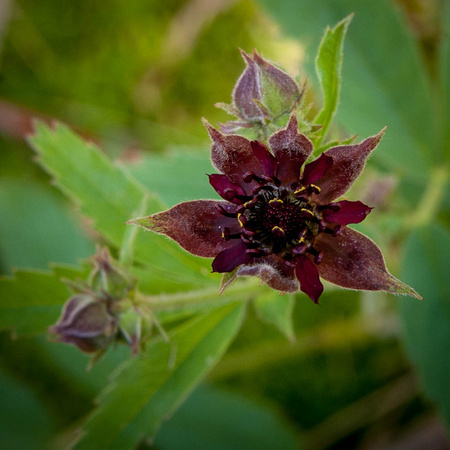 This first flower that we saw off the edge of the boardwalk is the Marsh Cinquefoil. There were many tiny blooms all over this plant, but I wanted to try to get a closeup of the wonderful detail of a bloom.

The only way to do it was to sprawl across the boardwalk and hang over the edge with the camera.  In this photo, you can see a few buds behind the flower that have not yet opened. 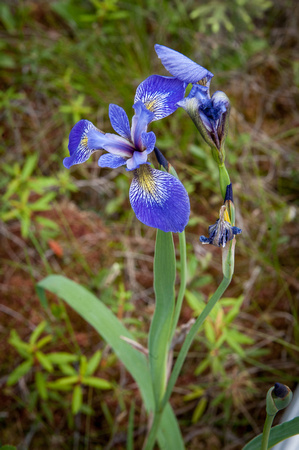 The next flower sort of surprised us as we came around a bend in the boardwalk. It couldn't get any closer!  The irises in our yard had bloomed and disappeared several weeks ago, so this was a great surprise to see this one still blooming. Another plant nearby was just getting ready to bloom.

This is the Harlequin Blueflag Iris and its color was absolutely amazing! 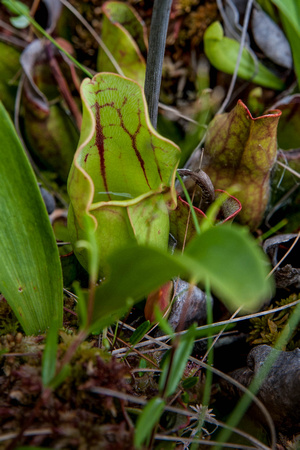 One plant we both were hoping to see in the bog is the carnivorous Pitcher Plant.

It wasn't too long and we were seeing tons of them in the sphagnum moss.

What we didn't expect was...

BLOOMS!  What a crazy flower these Pitcher Plants have! 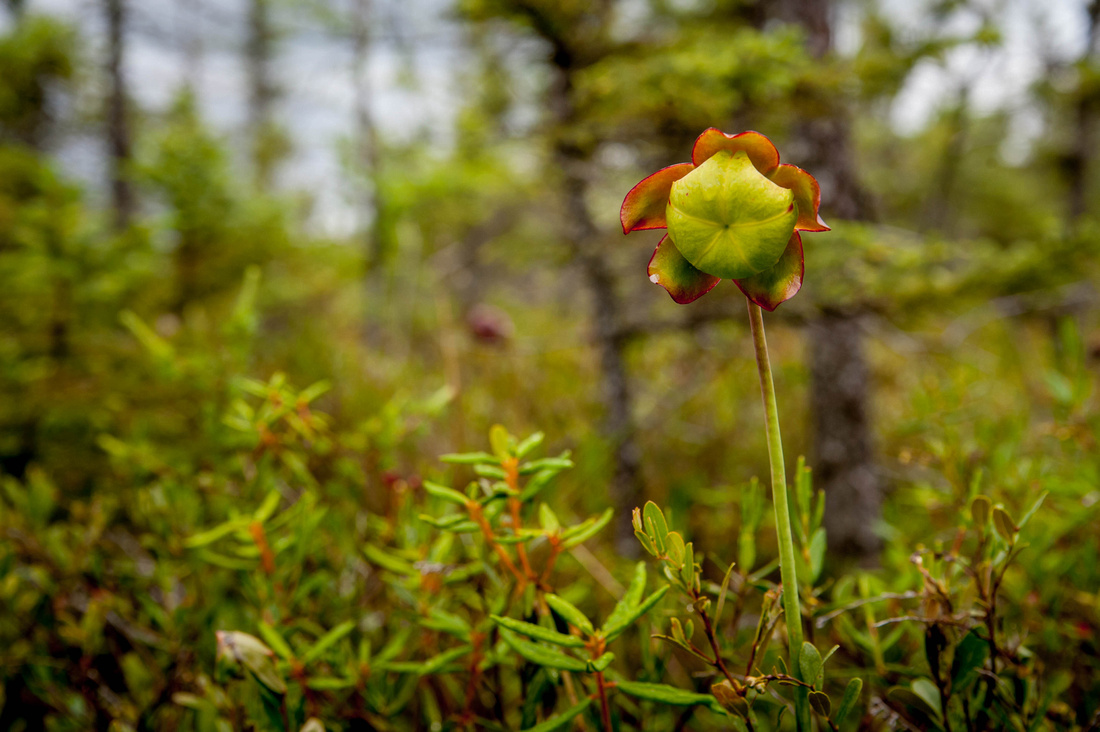 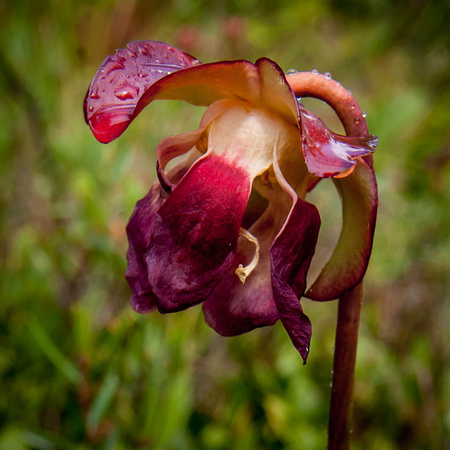 Here is a closer view of a bloom that has opened a bit more than the previous image.

Upon reaching the end of the boardwalk, I thought it might be nice to point the camera in the distance rather than down at the plant life. While the boardwalk stretches out for a mile into the bog, it is such a small portion of the entire bog.  This bog spans over 500 square miles and is the largest bog in the lower 48.

We had hoped to hike two other trails in the recreation area that travel along an "island" in the bog.  However, another feature of northern Minnesota made it pretty much impossible.  With all the rainy conditions, the mosquito population in the forest was ridiculous to say the least.  We decided that we would probably just be miserable and decided to visit another time. 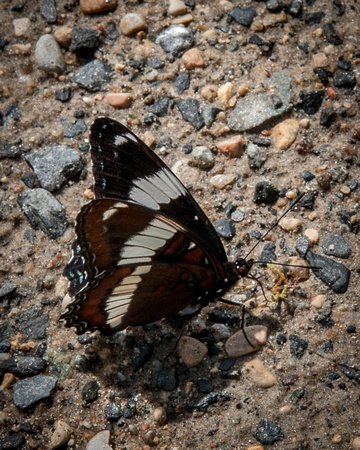 As we were packing up, I did get a chance for one more photo right in the parking lot.  A particular butterfly that I haven't seen since I visited Isle Royale in Lake Superior several years ago.  This is a White Admiral and it was very attracted to the mud in the parking lot as this sort of butterfly can be.

I was glad to get in at least one butterfly photo on this day.  The next day was better for butterflies.  Check back i the next day or so and I'll cover that next day when we visited Lake Bemidji State Park.