This will be the middle post of my latest trip to Sica Hollow State Park in South Dakota.   I had two goals for this trip.  To hike some trails I hadn't been on before and to get my first photo of a butterfly for 2013.

My last post showed the success of capturing that butterfly photo.  However, in my attempt to track down a butterfly, I actually had a lot more success with other critters in the park.  I thought I'd share some of those with you. 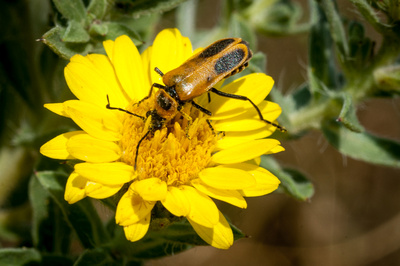 In hiking a completely different trail than I've been on before, I found myself climbing a long ways up immediately.   This trail wastes no time in getting from the valley where the streams and the picnic area are to the top of the hills and back to typical South Dakota Prairie.

The sun was warm and I found a number of wildflowers on the top of a hill, so I took off my backpack, pulled out the canteen and took a break before diving in to shoot wildflowers.

In addition to the flowers, I found tons of these little guys.  I assume they are some sort of beetle (anyone with a suggestion on identification, I'd love to hear from you!)

However, on this warm afternoon, there was one type of resident of the park that was much more prevalant than anything else. Dragonflies!

I find butterflies can sometimes be very sociable and will often stick around for photos if I am patient.  Wasn't really the case this day.  Dragonflies are a little different.  They aren't as social, but they appear to be creatures of habit.  OR they know what they like. 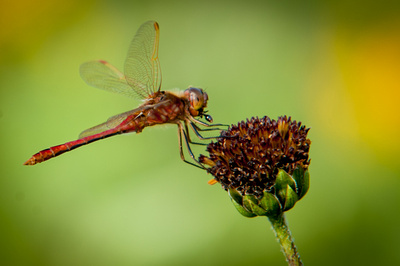 If you can find one on a perch and approach to take a photograph, they'll take off and fly away.  But, I found if I get in place and prepare my camera as if that dragonfly was still there, it will usually circle around and eventually come right back where it was.

That's exactly how it worked for this specimen.   I crept close until he took off, snuck up a little more, lined up my camera and waiting for a few moments.  Makes it a little easier than a butterfly to compose a shot and make sure you catch it.

I'm not sure what that shiny little package under the dragonfly's mouth is.  Hopefully, someone out there has an idea.

I went back to hiking and unlike the previous dragonfly, this next one had no interest in leaving his perch.  Must have been too darn hot to care.   I was even able to take off my pack, kneel down and spend time picking the angle I wanted to shoot. 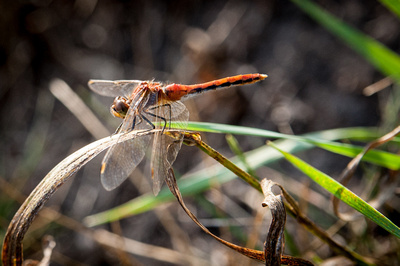 With their transparent wings, you definitely want to be able to compose a photograph.  You want to make sure that viewer is able to see their wings and not have them blend in too much to a busy or cluttered background.

Somewhere not too far beyond this second dragonfly, I started to find a few butterflies that were willing to be photographed.   Take a look at the last blog post for that here, but not to get too far off topic, because as I finally got to the highest part of the park, I found several ponds.  Honestly, I wasn't expecting that.  I am sort of glad it was late in the summer, as I might have had a hard time getting through some parts of the trail that are obviously creek beds in the spring.

However, along with ponds, I was surprised by something in the middle of the trail that I definitely didn't expect.  He got a little nervous, because if he had just stayed where he was, I never would have spotted him. 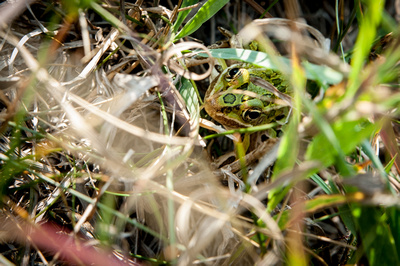 Frog in the grass 1 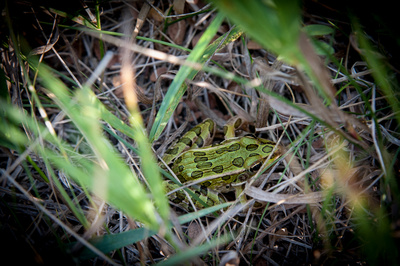 Even knowing that he was there, it still didn't make it all that easy to spot, especially in the first photo.  Wow, nature sure knows how to blend in.  The frog stuck around for a few shots and then decided to move on.  Matter of fact, I was adjusting my camera to take a photograph from a different perspective and like magic, he had bolted and I was left with prairie grass in my viewfinder.

From this point on, I worked over a short distance to the camp ground at the top of the park and found the trail on the other side of the road to work my way back down to the bottom where I parked.  I was surprised to see one more unexpected critter, but this one was WAY too fast for me to get a photo.  This trail dives into the forest, so I went from the bright sunlight into the dark twilight of the woods. Anyways, I guess we were obviously both surprised to see one another.  As I came around a corner on the trail, right in the middle of the trail taking a nap was a cat.  Probably belongs to the farm just down the road from the top of the park.  I'm sure the state park is a great place to prowl and hunt for birds and such.  Anyways, by the time I registered what I was seeing he was off like a flash.

The sun was fading rapidly and I was going downhill over trails I'd mostly been on before, so I moved along pretty quickly and didn't spot any additional bugs, amphibians or felines.  There was a few pesky mosquitoes, but I don't expect I'll ever slow down to photograph them.

I'll finish my Sica Hollow Posts next time by highlighting the flowers and plant life that I photographed.  Until then, I wish you the best!