I was fortunate enough to photograph a wedding last Friday at the Grand Superior Lodge in Caste Danger, Minnesota.  It is a truly fantastic location for a wedding.  Hard to go wrong with Lake Superior as your backdrop.

My wife and I decided to stay until Sunday and make it a mini-vacation.  On Saturday, we drove up MN Highway 61 to Tettegouche State Park.  If you know me, you know I was out shooting various wildflowers and chasing butterflies as much as photographing the standard attraction there (waterfalls).

After hiking up to the aptly named High Falls, we went in the opposite direction and made our way to the lake shore.  We sat and took in the sun and poked around in the rocks for Lake Superior Agates – Minnesota’s state rock.

My wife pointed out to me some unusual formations on the horizon.  At first I thought perhaps storm clouds, but then a light bulb went off in my head about an atmospheric phenomenon that I had read about, but had never seen.  Of course, it had to wait until I had an internet connection to help me recall the name and the details.  What we were seeing was a mirage from the Apostle Islands approximately 25 miles across Lake Superior.  Below is a map from Google Maps giving you some perspective.  Click here to see in Google Maps if you wish to see larger: 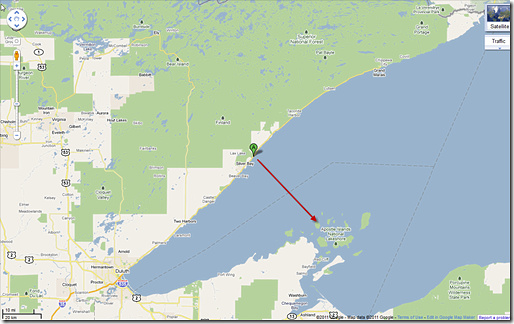 According to the Wikipedia article: A Fata Morgana is an unusual and very complex form of mirage, a form of superior mirage, which, like many other kinds of superior mirages, is seen in a narrow band right above the horizon. It is an Italian phrase derived from the vulgar Latin for "fairy" and the Arthurian sorcerer Morgan le Fay, from a belief that the mirage, often seen in the Strait of Messina, were fairy castles in the air or false land designed to lure sailors to their death created by her witchcraft. Although the term Fata Morgana is sometimes incorrectly applied to other, more common kinds of mirages, the true Fata Morgana is not the same as an ordinary superior mirage, and is certainly not the same as an inferior mirage.

I’d be the first to admit, perhaps these may be an “ordinary” superior mirage, but it was cool to see and I’m glad I finally had some kind of an idea of what it might be like.

I hope to post a few more photos from the trip soon and also a special post from a writer that used one of my photos in a recent project.